This would be pretty big post, might take up more than a week to complete, so please bear with me.

I had a flight for Amsterdam to catch, was a long flight, writing a post seems to be the best time killer. The idea of organizing a Circuit Python Day was put up by Ayan, sometime in June, I don’t remember exactly when. Honestly I only came to know about Circuit Python when people on Twitter started posting about it during PyCon US. Anyway, after popping in the idea, the first hurdle was to select a day since, 8th August was not a weekend. After some debate we settled on 4th. I won’t say we, cause it was just me, vouching for 4th, since I was going out of town for a week the very next day. For most of others either weekend would have worked, so the date was finalized to be 4th of August. Hurdle 1 crossed.

Venue, ahh, the most basic problem we are always plagued with. But to our rescue, we got a venue in no time, wow, thats amazing, thanks to Nikhil and Ruchika for their efforts in securing the venue. After all it turned out be a perfect venue for hosting a hardware meetup. But as we got to know a later, their was a mixup in between as we forgot that the event was on Sunday and the college, Indira Gandhi Delhi Technical University for Women remain closed. As someone said, everything happens for a reason, if we had got the auditorium instead of the incubation center, we probably wouldn’t have a great event like we had. Hurdle 2 passed. In the meantime, someone popped as food sponsors, which makes us skip another hurdle, yay.

If I had given a name for every act, this would be the “Get the Hardware Act”. This is because the next hurdle was to get the hardware from adafruit on which we would be hacking on. The order was placed for 10 Circuit Python Playground boards, among which, all arrived before the event. Don’t think it was as simple as that, let me show some glimpses of what went behind the scenes. 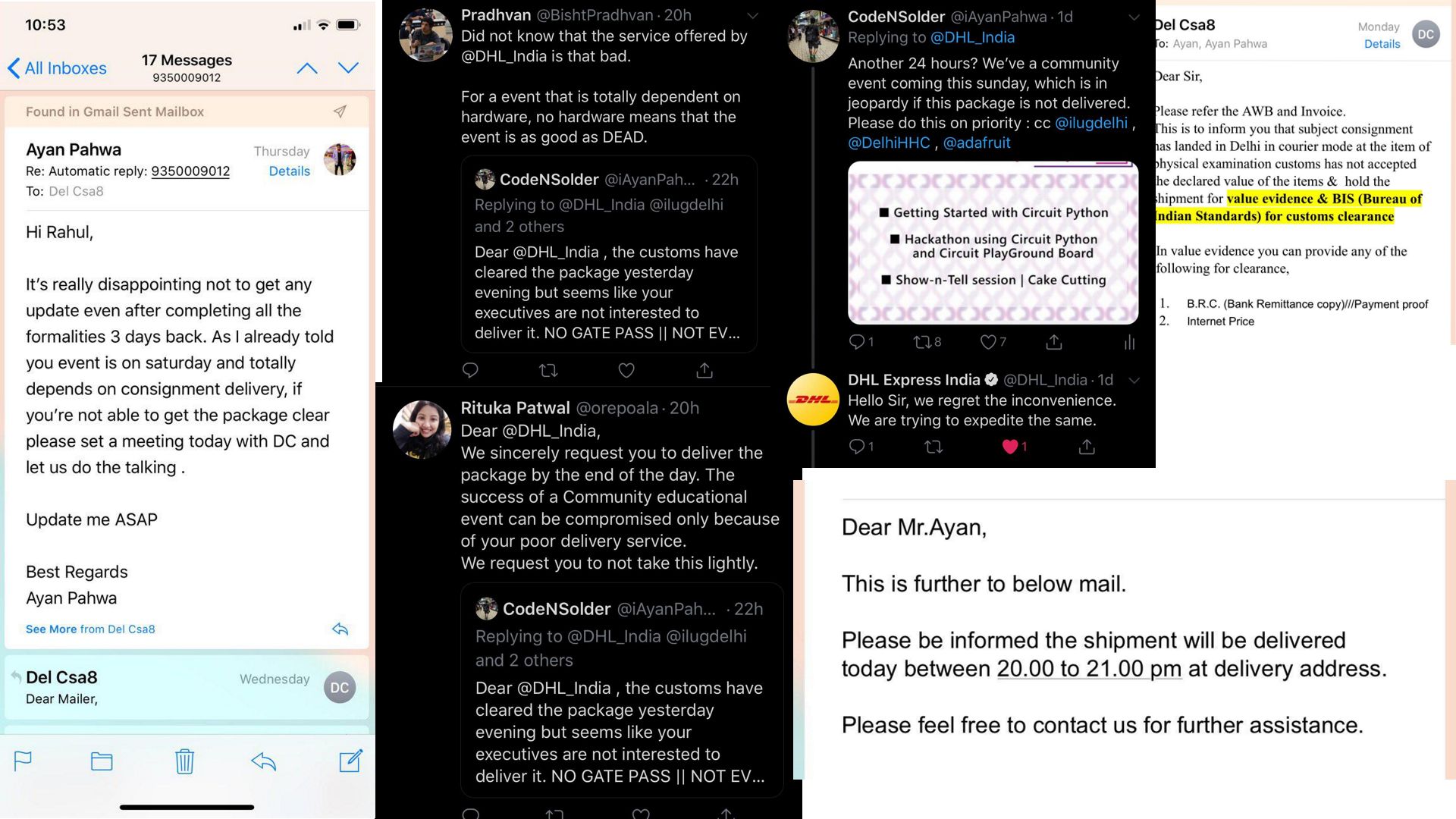 The parcel was to be delivered by DHL, a famous delivery company it is, I guess. We all were happy when the package arrived at the customs well before the event, little did we know that it would be stuck there forever. That was until me, Alok and Mohit visited their customs office, this still sounds sane right? Well no, yours truly was not allowed to even enter the premises, not only me, none was allowed at first, but after some talking the guard, he allowed two of us. And eventually I sacrificed myself to deal with Delhi sun. I would say, that was worth sacrificing, since they told us, after some tweets, that the package will be delivered the next day which was the day before the event. Still fine, right? no, cause the next day, when one of us rang their phones, we got “अब तोह Monday को ही डिलीवर होगा” ( Translation: It can be only delivered on Monday now). Wait, wait, wait, whut? Looks like the end would be anti climatic, enter Sanjay sir, 😆. A barrage of calls and tweets, followed by paying an express delivery charge of around Rs. 6000, we finally got the package around 9 PM Saturday. All thanks to the guys who came along in Twitter, specially Rituka whose tweet poked DHL’s Germany office and started the chain of events. Also kudos to Ayan, Mohit, Shivam and Sanjay sir, 😆 for picking up the package that late.

When you put the bar for hurdles that high, rest we can just ignore. Promotions went smooth, including my poster and Ayan’s video, popping up in Adafruit’s newsletter, getting featured in their YouTube channel. And when Mohit is handling the Twitter, we can assume nothing would go wrong, except probably, spelling mistakes? 😆. Preparation, all done, lets get to the event day then.

Nothing special, picking up the cake, me and Soumya, reached the venue, a little bit late, Ayan had already started and I just got to the back and lied down, completing my missed early morning nap. Fast Forwarding to lunch, honestly, no ILUGD meetup that I have attended or organized in the past had better food, subways along with cookies, coke and chips, cherry on top, we had a non veg option too. With that said, as planned in the schedule we went with the hackathon and for the first time, we had not only one but 7 projects made by the participants, thats another feather on the crown. And as always, it ended up with cake cutting, cleaning up the venue and then distributing the remaining food among the not privileged ones.

Note: It turned out that, the photo printed on the cake was next to shit, so decided to not put up a picture of it here.

Talking about the projects let go through them one by one, 🙂 :