With everyone getting back into work, we have managed to control the number of bugs. There are 2 fewer bugs than what I reported last time. I know it is still not a lot, but with Dmitry not available for most of the time and team having to divide its time between the resource rewrite & bug fixing, it is pretty good that the number is decreasing. 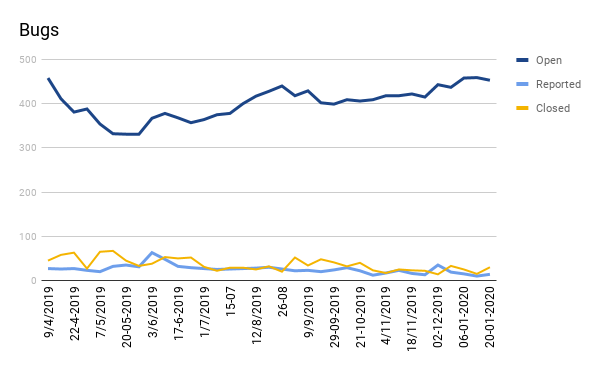 The commit history surely tells that Boud did a Coverity scan and fixed a lot of issues identified by it. Tiar is busy fixing OpenEXR. She also amended the manual a bit regarding all different logs and back-traces that one can get out of Krita. Other than she has also made herself available for documenting some of the code related to resource rewrite. As I said earlier Dmitry is on parental leave, but he still managed to pull off a couple of patches in the last two weeks while trying to fix the transform tool bugs.

Ramon is gearing up for a new video about the brush engine for our YouTube channel, don’t forget to subscribe so you won’t miss. Ivan is deep into bug fixing and apart from that, he is also trying to get a multiple tip brush into play.

Apart from those, as a part of Season of KDE, Amyspark would be working on fixing the floating-point operations on CMYK and Lab color-spaces. Also, there is a mixer slider docker in Krita now thanks to Tusooa which allows you to choose from the gradient between two colors.